Getting older I’ve been somewhat surprised that I tend to live more in the future than in the past or present. This seems to be pretty much a function of raising a granddaughter (and still having several children in university or close to it). I’m continually thinking about how their lives will turn out and how long I’ll be around to help them as they transition in adulthood.

It’s gotten a little frustrating – this living in the future – as Indonesians are not generally known for their proclivity for living in, or planning for, the future. So, I’m usually out of time-sync with most everyone around me. And, as my memory continues to deteriorate at a faster-than-hoped for degree, trying to keep track of everything swirling around gets more confusing and frustrating. I wasn’t consciously aware of this (even though the signs have been fairly evident for months now), but weeks of nightmares led me to go back to the source of my early graduate school training in psychological and psychoanalytic anthropology. So out came the Freud in an attempt to figure out what my unconscious was insistently trying to tell me. I went through Interpretation of Dreams, Civilization and Its Discontents and a variety of essays in a few Freudian collections. The common thread finally became evident – a loss of control.

According to my neurologist, this feeling of a loss of control isn’t uncommon in people who have had a number of strokes. So the problem was how to deal with this disconcerting emotional state. Going back to the source of my sojourn in education brought me to the realization of what it was that was troubling me, but it hadn’t given me to way to deal with it. And, that’s where my youngest granddaughter comes in. 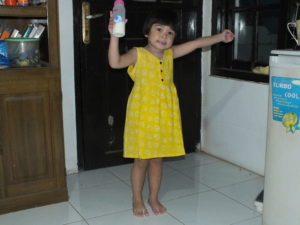 Zoey has already developed a basic understanding of time – before (the video we saw before, Grandpa), present (let’s play ball, Grandpa) and future (when we get home we can go upstairs?). But, in the main, Zoey lives in the present: she’s acutely aware of everything that goes on around us – on our walks, when we play in her room, when we’re about to take a nap. She catches the details of the moment both for good (wow, big goats!), and bad (oh no, the nasi lady is gone). She sees the butterflies across a crowded street and the new house under construction a block away. Her greatest concern is the problem immediately confronting her. She enjoys life, she laughs a lot, she’s always present even when I’m not. That vacant look that she occasionally gets from me elicits a response of “no sleeping, Grandpa.”

This three year old bundle of energy takes things as they come. Her big thing now is sharing, and she believes that everyone will share like she will, that everyone will have the same big open heart that she has and that everyone will play fair and be friends and that things really are good and beautiful. That’s a lot of faith in believing that things will all work out for the best, and it’s something that our children and grandchildren have (and that we once had when we were younger). And, a lot of that faith, I think, has to do with her living in the present; she doesn’t remember when her friend smacked her over the head with his toy or when Grandpa was grumpy and made her take a nap, or when the crazy lady in the street hit her with a newspaper. She lives in the now, she has faith that things are going to be great – it’s a beautiful day Grandpa; look at that, Grandpa, it’s amazing. It has nothing to do with religion or politics or ideologies; it comes from deep down in the human DNA, that inherent optimism that we often let get buried by all the layers of cultural conditioning. She lives in the Now and that seems to me to be about the best place to be these days.