I’m going to take a brief break today from my walking tour of Singaraja and journey back to Pakistan where I spent four intense, memorable and rewarding years. One of my teaching responsibilities during the first two years of my teaching in Lahore was a high school anthropology class. Those two years were the only time that I taught an anthropology class to students below university level, so it was a bit of a challenge. But, I had the opportunity to take two of my classes outside the school for field trips around Pakistan. The first trip included a visit to an old fort in the town of Sheikhupura which is jus 35 miles northwest of Lahore.

The city origins date back to 100 BC. Sheikhupura takes its name from the nickname for the Mughal Emperor Jahangir. Alexander the Great supposedly fought a battle here. The city was a focal point for struggles between Muslims and Sikhs for control of the area. The Sikhs eventually won out and held the city until they were defeated by the British sometime around 1850. Sheikhupura became part of Pakistan after Partition. Until then, the city was a mix of Hindu, Muslim and Sikh residents. 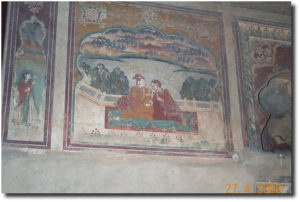 It seems uncertain exactly when Sheikhupura Fort was constructed. One argument is that it was built in 1619 for use as a hunting lodge. It is generally accepted that the fort was built by Emperor Jahangir sometime after 1607 and was used as a camp for the Emperor when he was in the area, usually for hunting. Later the fort was used as a home for the Sikh Princess Rani Nikayan; this accounts for many of the lovely frescoes still in existence (although some have been defaced by vandals) of dancing girls, court scenes, wildlife and images of Guru Nanak. The Asian Historical Architecture has an excellent section on Sheikhupura Fort including interior maps and 90 photos. I love this site because I lost most of the photos that I took during our field trip.

According to a news report from 2010, the United States was contributing $850,000 to the cost of renovating the fort. I was looking for some more recent information on the renovation project, but I haven’t been able to find any. This is one of the many places that I would enjoy visiting should I be fortunate enough to return to Pakistan one day.