I’ve just been talking with an old friend, Hassan, who was one of my main partners in crime during my years in Papua. We built a funky hotel/restaurant/hangout with a lot of good intentions for creating links between Indonesians, Expats and Papuans. The place, The Timika Yacht and Swim Club was built on the Kayoga River outside of the town of Timika (it was a small place in those days). So, thinking about Hassan and the Yacht Club and those long ago days, I did a quick search and came up with an old blog of mine from 2008. I thought it might be fitting to repost it again just in case I actually see Hassan tomorrow and we get to reminiscing.

Here’s a post from the original Life in the Tropics blog over at blogspot. New Year’s Eve got me thinking about this one although I just stayed home and watched some fireworks from the balcony. The old drinking days are a bit of the past. 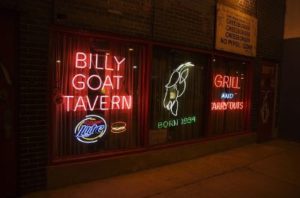 The joint didn’t exactly look like this when I hung out here, but close enough – when I drank there in the 70s it was just a little hole in the wall institution that was immortalized by Jim Belushi’s Saturday Night Live skits. Back then, it was just a place that Chicago Tribune and Sun-Times workers used as a place to have a few drinks at lunch or after a shift. It was unpretentious and quirky. I ate a lot of cheese and egg sandwiches there over the years.