Bali. For some people the name says it all – warm seas, soft sands, cold beers, vibrant colors, exotic sounds, friendly people, wide smiles, laughing children, a multitude of inexpensive small hotels and homestays. Bali. A land of wonder and magic set in the warm waters of the Bali Sea and the Indian Ocean. 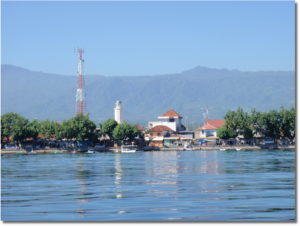 Bali. The tourist-ruined, money-soaked island sucking in foreign dollars for the Indonesian government in Jakarta. Hand-planted rice, delicately crafted religious offerings, vibrant cloths used in ceremonial clothes. Gamelan orchestras practicing in the warm nights under a brilliant moon, fishing in a traditional prahu chasing tuna and flying fish, the mystery of a wayang kulit in a village with the children laughing, the men gambling, and the women making comments on their husbands’ performances or lack thereof. Bali. Which one is it?

The answer is that there is no answer – it all depends on what you bring to Bali and where you take it. There are foreigners who have come to Kuta and have never left. The excitement, opportunity and midnight rush have seduced them into finding a way to build a life there. Sanur, a twenty minute ride from Kuta, is a more relaxed village catering to generally more upscale tourists. Then, too, there are the tourists who come and drink, dance, spend and flee looking for one more country or island to “do.” Come up to the north and you might find boredom or bliss. Quiet sunsets on Lovina or Anturan Beach, serene walks in scenic villages. Try Ubud, the fabled center of Balinese ‘culture,” and you may find fantastic artists and musicians, thrilling performances of ancient dances and plays, or you may find digital nomads wandering the street half-naked, rabid dogs, muddy pathways and cold showers. 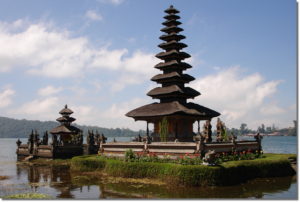 Bali. I first heard of the legendary Indonesian island during my freshman year at the University of Illinois in my Introduction to Cultural Anthropology course. Years later, I was a teaching associate in the anthropology department at UC Berkeley teaching an introductory anthropology course with Bali as one of the culture areas. And, while I had never been to Bali, my readings and lectures lit the desire to visit this island about which so much had been written just to see what the fuss was really about. As these things sometimes go, not long after I was offered a teaching position in a mining company on the island of New Guinea – not all that far from Bali. The fulfillment of my desire was just on the horizon. When I left San Francisco in 1989, I never imagined that I would still be living overseas 28 years later. As the Grateful Dead say, it’s been a long, strange trip. 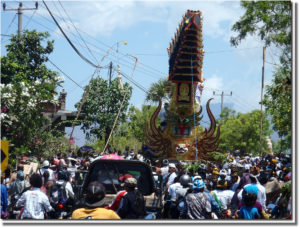 Being one of the old-timers now on the island, I tend to get lulled into thinking about how much better the island was before tourism boomed – there were plenty of tourists when I first came here, but every year the numbers go up and in some parts of the island – Ubud and the Kuta/Legian/Seminyak area in particular – high season just means even more tourists than usual. We like to talk about the adventure that life here was back then when many places still had no electricity, it was more common to drink warm beer than cold, streets in the villages would turn into streams of mud during the rainy season, and you never knew what strange thing you might find around the next bend in the road. 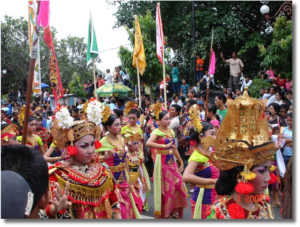 Thinking about the lost, the real and the imagined Bali. I find that living in a developing-world slum keeps me somewhat less in need of a reality check than some of my friends who actually buy the market-driven fantasy of a paradise island. And, yet, driving through these solitary mountains and antique villages bereft of Mercedes Benzs, delivered pizzas and organic carrots grown in soil saturated with the green revolution’s chemical remnants reminds me that something brought me here so many years ago long before it was discovered by yoga-drenched sybaritic youngsters looking for one more fix for their god-obsessed wandering. We project our needs, desires and dreams on this little, overcrowded island of drama, ceremony, magic and tedium. People of all ages, classes and nationalities arrive here daily: many are physically ill, emotionally-drained, financially or intellectually challenged. They are looking for something special to recharge, revitalize or renew their lives. They’re looking for that special magic that Bali is so famous for. Some find it and go on to develop their lives, others just can’t connect to the realities of life in a developing country. 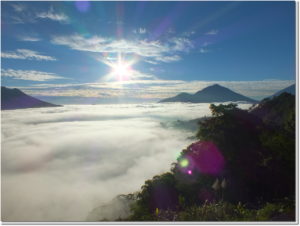 So why have I stayed in Bali and not gone back to the States or off to another country around the world? Serendipity is one short answer. A close American friend and long-time Bali resident has the saying: many are called, few are chosen. Without getting overly mystical, I felt a pull here within the first month that I was here. Not as soon as I arrived; I stayed my first week in Kuta and while it was a welcome break from life in the mining camp where I lived, it was not what I had hoped to find here. But slowly over the month of my vacation my perception of Bali developed. It was a combination of the natural beauty of Bali and the friendships that I developed with Balinese. It happened when the giddy edge of exotic strangeness started to wear off and a feeling of normality set in. It was then that I realized that I wanted to live here permanently. It wasn’t cheap living, it wasn’t being able to build a “villa,” (never been there, never done that), it wasn’t having a “staff” to cater to my every need, it wasn’t even because of a woman (I had already set my mind to living here permanently before I met the lovely Suhana). It was that mystical something that drew me here and keeps me here. 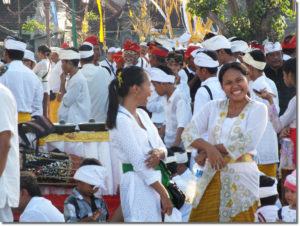 We imagine what we’d like to see when we travel. In the days before social networking, smart phones and instant images that can be transmitted across the globe in seconds, tourists would develop mental images of what they might meet upon entering a foreign country, then those imagined images would be adjusted to the reality. Now we can see our hotel room online, read updated reviews of the restaurant, check out the toilet facilities, see who our neighbor is going to be on the airplane, view anything and everything in a 360 degree total surround sound view. Traveling around to exotic locales isn’t what it used to be in terms of adventure, but for those of us who have been around this tropical “paradise” for a long time, we need to remind ourselves that others arrived here before us and said pretty much the same things that we say now. We just need to remember that the beauty of the island is not just in a startling sunset or a lush paddy but in the dignity and strength of the people that live here.

This site uses Akismet to reduce spam. Learn how your comment data is processed.